B was born to an addicted mom & an addicted absent father that never admitted responsibility. He came to live with me (his grandma) & papa at 3 days old.  Whoever thought we would be feeding and changing a newborn at the tender age of 65, barely retired, after raising 6 children that were all on their own for years?  Exhaustion is too simple of a word. Yet one look at this tiny being and we knew that we could never let him go and be a part of the system.

Baby B’s mom, thankfully went to a treatment centre when he was 3 1/2 months old that allowed moms to be with their baby.  She stayed there for almost a year.  We were so elated that this happened as she had been on the streets homeless, on Meth, for over 6 years.

Once she was out of treatment, we were hoping she would move closer to us.  We had bonded with B and missed him and her so much.  Instead, she moved to the Island to live with her 6-year boyfriend (not B’s father) that was also her past drug partner.  He was fighting health problems due to years of drug abuse and she felt he needed her for support.  In the end, he needed more care than she could handle.  Being a new mom fresh out of rehab, with no ongoing support, the pressure got the best of her and she relapsed and relapsed badly.  Right into Fentynal.

B was once again placed with us under the EFT program.  It’s been over a year now and he is now 3 1/2 years old.  I am now at the ripe age of 66 going on 67 (going on 99), who had to try to navigate the system between different areas of the province to get B Assessed as having possible ASD, and having no pediatrician to help guide me where we are (waitlist).

There has been very little communication with myself and MCFD except on my constant nagging via email.  I had to communicate with them on the Island trying to get me paperwork for his Birth Certificate, Immunization Certificate, anything I could get on paper that would let others know I have the responsibility and right to act on B’s behalf due to his mother being incompetent under the EFT order.  It was a battle!  It took me over a year to get all paperwork in order to get B assessed.  In the end, it was unfortunately confirmed.  He has Autism and is Globally Delayed.  Now I have everyone suddenly banging on my door to hurry and wait. Government funding is on its way! BUT there is a (waitlist).  No thank you.  I’ve researched and have my ducks in a row.  If I need you, I will call.  I realize that staffing is an issue, covid is an issue, but my grandson only has 2 1/2 years to get early intervention before MCFD pulls the plug on Autism Funding. Yeah! Not!

Next came trying to find a daycare to support his needs, even part-time, Speech Therapy, Occupational Therapy, Physio Therapy, Behaviour Interventionist etc. I found myself applying and waiting for Autism Funding (held up due to EFT investigation?) but then finding I was paying out of pocket in order to keep private therapists.  It was that or to go on a (waiting list) for months & months for Child & Youth Development.  What doesn’t anybody get? He can’t wait!

Do I think my daughter could have handled all this on her own? Not a chance in hell!  We decided that putting in the time and effort ourselves is the only way to go.  Fight for your grandchild/children!  Make noise! We aren’t going anywhere until this precious little guy gets a good fighting chance to be the best that he can be.  Whatever that looks like.

As for his mother, social services dropped the ball when she first moved to the Island by not ensuring she was getting follow-up treatment or getting a random drug test.  I do not believe her promises of getting clean and being more involved in her son’s life at this point.  She isn’t even living close to us.  We have to focus on her son and let her work her out.  To worry about both is unfortunately too much.  It’s not a choice a mother would willingly make unless forced to.

Tired … but still have some fight in me,
Grandma R

“This documentary will make you laugh, make you cry, and we hope, make you think.”... 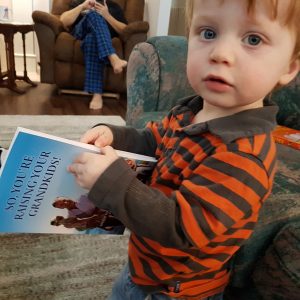 Hello kinship caregiver. Thank you for considering sharing your story with others. Perhaps you have... 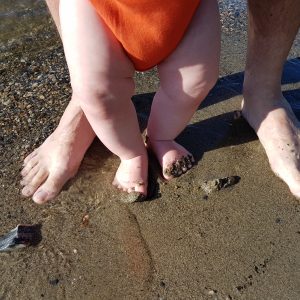 Be heard. Be seen. Be respected. Be supported.